Filed under: Tags: No tags

Fiberglass Pressure Tests and Why They Are Misleading 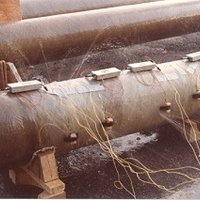 Anytime you see some outstanding claim of a high burst pressure that reaches some ‘amazing’ pressure value before bursting, you should question its validity.

A pressure test should have axial and hoop load to be legitimate, if the pipe is being constrained in the axial direction during a burst test the test is absolutely invalid in regards to the loads a piping system experiences during operation.  A pipe in operation sees both hoop and axial load at the same time throughout much of the system.  Therefore, a burst test with just hoop load is of limited value and is usually misleading in regards to qualifying a pipe for pressure service.  Burst tests with both hoop and axial load can be as little as 50% of the value of a burst test with hoop load only.

It’s this simple, if the pipe in a burst test is free standing with viewable dome ends it’s loaded bi-axially. If you see any ‘apparatus’ restraining axial load in any way, the pipe is only bearing hoop loads.

In the end, tests with hoop load only can lead to fiberglass piping systems that have much lower factors of safety  in service than owners and operators  desire and in some cases can lead to premature failures during commissioning or at any point down the road.

So next time you see a burst test, don’t be fooled, question the results.